Contrary to what the name implies, a person who is farsighted has blurred vision when looking at close objects, unless they make a constant effort to focus, which can lead to strain, headaches, and eye fatigue.

Farsightedness or hyperopia happens when the eye is shorter than normal. This shape causes images to be focused behind the retina, rather than on it. It is a common condition that most often is inherited. As a result, the lens of the eye must exert effort to focus the image on the retina.

Babies and children are usually slightly farsighted; as their eyes grow and lengthen, the condition corrects itself, generally by age seven or eight. Young adults who remain farsighted often don’t realize their condition because they have enough flexibility in focusing power to correct the condition without the aid of eye glasses or contact lenses.

At first, symptoms may be undetectable or very slight. With age, increased difficulty seeing near objects may be noticed until eventually even distant objects appear blurred.

A person with nearsightedness can see close objects clearly, but may have trouble seeing objects from a distance – like a road sign, blackboard, or face across the room. It’s a common condition, affecting 1 in 4 adults worldwide.

Nearsightedness or myopia happens when the eye has a long shape, which causes light rays to focus too far in front of the retina, making distance vision difficult.

Like farsightedness, myopia can be inherited. It is often discovered when children are 8 to 12 years old. During the teenage years, when the body is growing rapidly, nearsightedness can get worse. Typically, between ages 20 and 40 there is little change.

Nearsightedness is easily corrected by refocusing the light rays onto the retina of the eye. This is commonly done through: 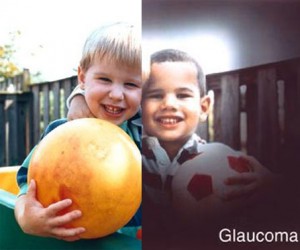 symptoms and eventually cause harm to the optic nerve that carries information from the eye to the brain.

In most cases, glaucoma is associated with higher-than-normal pressure inside the eye (ocular hypertension). If untreated or uncontrolled, glaucoma first causes peripheral vision loss and eventually can lead to blindness.

According to the American Academy of Ophthalmology (AAO), the most common type of glaucoma — called primary open-angle glaucoma — affects an estimated 2.2 million people in the United States, and that number is expected to increase to 3.3 million by 2020 as the U.S. population ages.

Globally, glaucoma is the second leading cause of blindness (behind cataracts), according to the World Health Organization.

You can then encourage your child to wear his/her glasses in a number of ways:

Some children do not like objects near their face. Others do not like change. But once your child learns that the glasses will not hurt and gets used to seeing more clearly, he/she will be happy to wear them. Start slowly and build up the wearing time gradually. If your child still refuses to wear his/her glasses, don’t turn it into a battle. Children learn quickly that a great way to get attention from parents is to throw their glasses across the room. What a great game! Most children grow out of their reluctance to wear glasses. Continue to take your child for routine eye exams annually and discuss any concerns with the optometrists.